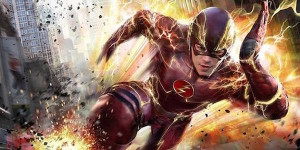 You might or might not know that the Season 2 finale of the Flash ended with Barry making an extremely fateful decision – namely re-writing history by choosing to save his parents from the Reverse Flash. What Barry didn’t take into account – or perhaps he did, and just didn’t care – is the impact of this decision on his timestream.  It might seem strange to be looking down the road when it comes to The Flash, since the CW TV series has kept a frightening pace since the very first episode. While other comic book shows and films tend to only tease their big bads early on, beginning their heroes’ crimefighting careers with lesser foes, the first half of The Flash‘s season saw the character’s most iconic villains introduced and regularly appearing – in the case of the Reverse-Flash, with an even more devious twist than usual.

WHAT WOULD YOU SACRIFICE TO HAVE EVERYTHING YOU’VE EVER WANTED? — Barry (Grant Gustin) is living his dream life – his parents are alive, he’s asked Iris West (Candice Patton) on a date and he can finally be a normal guy as Central City has another speedster, Kid Flash (Keiynan Lonsdale), running around saving the city. When Barry starts forgetting parts of his old life, the Reverse Flash (guest star Matt Letscher) taunts his nemesis and tells him that there will be serious repercussions for Barry and the ones he loves if he continues to live in this alternate universe. In addition to losing his memories, his powers will also start to fade. When disaster strikes, Barry must decide if he wants to continue to live in this world as Barry Allen or return to his universe as The Flash. Jesse Warn directed the episode with story by Greg Berlanti & Andrew Kreisberg and teleplay by Brooke Roberts.

The “Flashpoint” comic series – a major crossover story arc in the comics – will be influencing upcoming events on the show and it sounds like the premiere is going to deal with what’s next for Barry as he’s forced to decide between this new world and his old one. Of course, it’s no secret that this status quo won’t last beyond a few episodes, but the Reverse-Flash’s role in things is very interesting, especially as we know that he’ll be a bad guy in the upcoming second season of Legends of Tomorrow.