Star Trek – In the Name of Honour

This story takes takes place between the movies Star Trek 5 & 6, detailing the proceedings of peace talks between the Federation and the Klingon empire that came to a front in the beginning of Star Trek 6. The story begins with a deep space encounter, eight years earlier, between a Starship and an imperial cruiser.

In 2287, the Enterprise crew are attending a peace conference on Starbase 49 with the Klingons. Kirk is greeted by Koloth, the former captain of the IKS Gr’oth, whom they had a shaky truce with in the episode ‘The Trouble With Tribbles’. Koloth explains to Kirk that he has knowledge of Starfleet prisoners being held in a Klingon facility, on a remote planet, deep within Klingon space, and that their continued imprisonment is against the Klingon code of honour.
The story also follows events in the Klingon prison, where the prisoners endure brutal conditions and sadistic guards while being forced to mine for dilithium crystals underground. 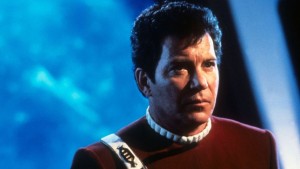 The peace conference continues, but suffers complications after a bombing occurs, narrowly missing some of the conference’s VIPs. During a scene aboard the Klingon’s flagship, another explosion causes damage to one of the ship’s warp nacelles, almost resulting in the Klingon’s firing upon the Enterprise in the confusion. This leads to a scene with Scotty and a Klingon engineer performing a space walk on the ship to remove another explosive.

Towards the end, Kirk, Koloth and Sulu stage an attack on the prison and rescue the Starfleet prisoners. They are then tracked through the planet’s dense jungle by Klingon forces, led by a rival of Koloth, named Korax, resulting in a phaser/disruptor shootout atop a high plateau. They manage to hold out against superior numbers and are rescued from the planet by a Klingon ship captain, named Jardak. Jardak, disgusted by the prison’s breaking of the code of honour, arrests Korax and orders an orbital strike on the prison, killing the remaining staff and prisoners.

Repulsed by the brazen killings, Kirk challenges the Klingon’s code of honour, angrily referencing how his son had been killed in the recent past by a decorated Klingon captain (Star Trek 3). This scene with Kirk voicing his deeply buried anger over his son’s murder was well written, explosive and dramatic, reflecting the many times in the series in which Kirk advocates moral decency. The book wraps up soon after this scene with Kirk & McCoy reflecting on the morals, or lack thereof, of the Klingon code of honour.

This was another great novel with a lot of intrigue and some good action scenes. There’s some variety among the story’s settings and characters, helping to keep scenes fresh. I felt that the writing style was a bit overly complex and that it could stand to be slimmed down, somewhat, also some characters don’t have much presence, such as McCoy and Chekhov. Overall, however, quite an enjoyable read that fits in well with the events during the Star Trek movies. Recommended for intermediate or advanced readers.