Back in the early 19th century a whole bunch of very paranoid textile-working bruhs had a major bitch-flip. They were called the Luddites and what they did was uprise, namely broke a bunch of threshing machines. Before you dismiss them simply as Green Street Hooligans their paranoia and consequent actions sort of made sense.

The Luddites rose-up during the early stages of the industrialization as they were afraid that the newly applied machines will leave them out of work. A very rational fear if you ask me. Now I’m not going to get into the history of England during the Victoria Era as quite a few scholars have already written pretty good books on the subject, but it’s just that this Luddite thing got me thinking.

Yes, I am aware that we are well past industrialization, but aren’t we experiencing similar social and economic changes now? Only instead of giant machines we have computers, and social media. More and more things are becoming digitized and automated. There is this great encouragement for people to do all of their shopping without leaving the house… Even at the airports many of the check-in stands are no longer ‘operated’ by humans but by annoying and slightly complicated-to-figure-out chunks of plastic and metal. I have to say that there is something very unnerving about this mass propaganda of replacing human connections with mechanisms.

But whatever, I’m not much of a people person anyway. So, lets connect the dots and get back to the main point, which is Tsutomu Nihei .

Nihei published his acclaimed work NOiSE in 2001. When I first read it my mind was blown not only by the fantastic art, but also by the sheer brilliance of the story, although back then I sort of dismissed as nothing more than over-dramatized work of fiction.

The story, much like all the great creepy ones, is taking place in a post-apocalyptic mega-structure of a city. At the centre of the plot we have the young police officer Susono Musubi.

Susono Musubi’s journey begins when she start to investigate the disappearance of little kids. When her partner is killer our heroine feels that something is very wrong, and it really is. The little kids are returned back to their homes with chips installed in their brains, this is the foretelling of the end of humanity. If you liked NOiSE you might want to check out its sequel BLAME! Even though Musubi is no longer the protagonist it still makes a mind-blowing read.

Funny thing is when I was reading the manga back in 2003 I thought that Nihei was simply being paranoid, or he was on something, but quite frankly the more I look at the world and our dependancy on along with the willingness to accept technology as an integral part of our lives I wonder just how prophetic his works actually are.

Rereading his things just makes me want to go out and look at the sky and walk on grass barefoot or something, and I’m trying not to be too cheesy here. 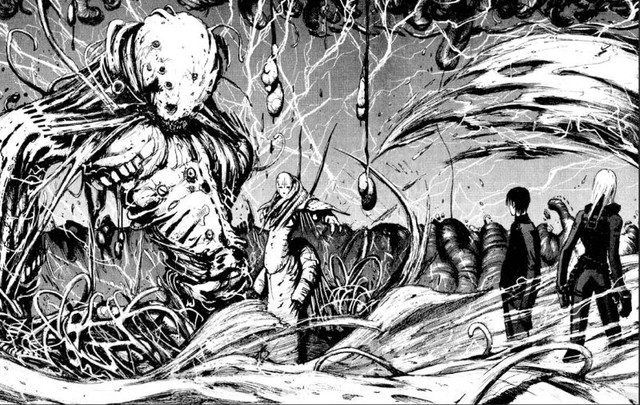 I’m not going to speak for Nihei by saying that he’s trying to rise some very serious existential questions, especially since he’s a sci-fi fan so maybe it’s just his imagination acting out… Either way his works do make you think, and in light of everything that’s happening today I won’t be too surprised if the remanent of humanity will find themselves in something very similar to THE CITY.