To me, animes are like apples. They’re really delicious, savoury, and crunchy when you get a good one; grainy, odd, and inedible when you get a bad one.

The problem with animes? While many look interesting conceptually, the experience becomes soured once you’ve taken a bite. Macross Delta, shame on thee!

AKA, the genre hexafecta equivalent to alcohol—addictive but will rob you of brain cells before you know it.

It’s been a few weeks since the debut of the Spring Anime Season and if you’re still wondering which ones do not fall under the abovementioned hexafecta, read on. 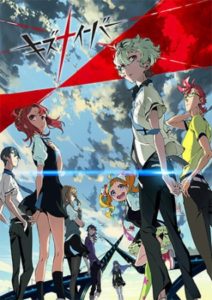 How to describe this show? Sense8 on crack perhaps?

Seven unique high schoolers are kidnapped and surgically implanted with a device that allows them to feel each other’s pain, turning them into test subjects for world peace.

Do I sound high writing that? I assure you I’m not but it’d probably be a good idea to be on something when watching the show. In no way do I publicly condone getting you-know-what, but when the opening theme is sung by Boom Boom Satellites…

It’s almost as if the situation calls for it.

I’m keeping a close eye on this one. I genuinely did not think I’d like it but the concept is so farfetched that after all 5 episodes released thus far, I’m left wondering where the story might go. In a very intrigued kind of way. 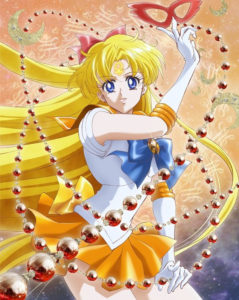 Want your craphole to get in a world of hurt?

As a legit fan of the original 90s Sailor Moon anime, I was disappointed at how closely Crystal followed the manga.

Minion of the week dead!

A minute after she’s introduced. 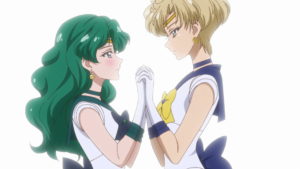 Crystal Season 3 made the list because of two reasons: Sailor Uranus and Sailor Neptune. Easily the most interesting of the outer Senshi, Haruka and Michirou’s introduction into the Sailor universe is not as straightforward as clear allies to the Senshi.

Plus, for those of us who were exposed to the “cousin-fiasco” in the DIC/Cloverway dub, we can finally experience the yuri love as it was always meant to be.

And that folks, is what Sailor Says… Moon Pranetu Powah!!! Meeeeik Apu! 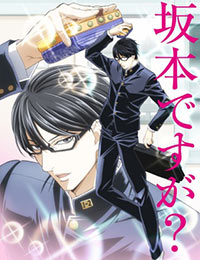 This is arguably this season’s equivalent to Daily Life of High School Boys.

Now, why would anyone care about a perfect student?

Because while Sakamoto comes up with quick solutions, is charmingly handsome, and is skilled in pretty much everything, his imperfection lies in his social awareness.

Or maybe he’s fully aware but has a sociopathic tendency to toy with social interactions? Tun dun dun!

Whatever. Come for the concept, stay for the hilarity. Sakamoto desu ga? is high school slice-of-life with the exaggerated anime funnies. 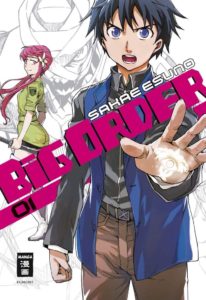 As the manga was originally written by Sakae Esuno, the same writer/illustrator behind Mirai Nikki (Future Diary), I had certain expectations for Big Order.

In the Big Order world, an omnipotent being grants a selection of human beings an ability—ranging from divination to immortality—directly correlated to a heartfelt wish that they had made. Dubbed “Orders”, these humans with abilities have naturally risen to power. Feeling guilty from having “destroyed” the world 10 years prior, our hero, Eiji Hoshimiya, has taken himself off the Order radar but soon spearheads a global domination plot in order to save his sister.

As a fan of Mirai Nikki, all I have to say in excitement for this show is: “Tea, biscuits, biscuits, f*** this tea!” Future Diary misheard lyrics fans will know…

That’s a mouthful of a title. 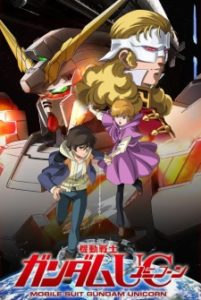 My interest in Gundam Unicorn is… well justified enough considering I haven’t bothered with a Gundam anime since Gundam 00 (Season 2 DOES NOT EXIST).

Gundam Unicorn is not immune to the “thematic staples” that reappear in every Gundam installment. These include, but are not limited to:

For those who find this franchise formula overdone, there is hope. If there’s one thing I can pinpoint that would explain my revived interest in the franchise… I feel that one thing would be dialogue.

Seriously, the Unicorn dialogue is a reminder of the franchise’s potential and I hope it continues for the rest of the season and the next. The new Gundam Wing, perhaps? 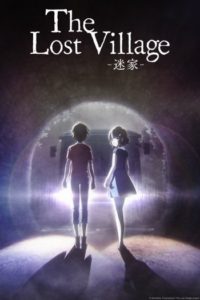 Out of all the animes in this list, I would say Lost Village has the weakest animation.

However, it provides a concept so intriguing that it’s worth skimming over the artistry.

In a nutshell, Lost Village documents the journey of 30 individuals (yes, 30) as they explore the forgotten village of Nanaki, with the hopes of detaching themselves from a society to which they cannot conform and to reinvent their identities by creating their own mini-utopia.

What they find in Nanaki, however, is something sinister, confounding, and very much linked to the supernatural.

None of them can leave!

Or at least, not yet.

Lost Village is Lost meets Higurashi No Naku Koro Ni (When They Cry).

You’ll see the parallels to Lost within the first two episodes. But why Higurashi? 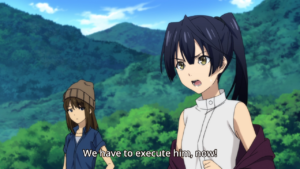 I kid you not, I find myself yelling out Shokei! (Execute!) at the most random circumstances. And hopefully, you will too. I’m just waiting for the part when at least one of the girls pulls a Rena/Takako/Shmion laugh.

Fun fact: Both Lost Village and Kiznaiver are, as far as I know, original animes (i.e. not ported from a manga or video game) credited to have both been written by Mari Okada. 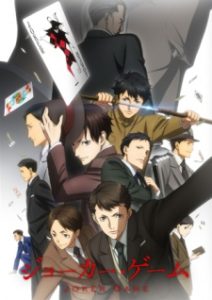 As it stands, Joker Game tops this chart because it excels in a lot of things:

Of course, whether Joker Game lives up to these three remains to be seen but the hallmarks for its potential are easily recognizable.

In no way am I condemning animes that fall under the above-outlined hexafecta (eehh, that’s a lie) but let’s be honest. There are just waaaaay too many bad apples that cater to the masses.

So go ahead! Throw away that bushel of bad apples and feast on the (potentially) few good ones!

Durarara x2 Ketsu should be a part of this list but I haven’t had a chance to watch it all in one go. After all, the story can be very confusing.