The Ghost – Agents of Shield

Marvel’s Agents of SHIELD is leaning hard on Ghost Rider joining in Season 4 as a hook to get people watching the show, so it makes sense that Gabriel Luna’s take on Robbie Reyes would be introduced right at the beginning of the premiere, “The Ghost.” It was the right choice not to force viewers to wait to see the fiery Marvel superhero, and he proved to be the best part of SHIELD’s return.  As always with new beginnings on this show, the status quo has radically shifted. The last few moments of season 3 jumped ahead six months and gave us a quick look at where the characters had ended up in the wake of Hydra’s final defeat, but now we know for sure.

The difference made by shifting Agents of SHIELD back to a 10 p.m. time slot came across most notably through the Ghost Rider story arc; there’s a whole lot more blood this season, and a generally darker aesthetic. Thinking back to the Season 1 premiere (which was in an 8 p.m. time slot), it’s clear how Agents of SHIELD has matured over the years, and given the success of the darker Marvel shows over at Netflix, it’s a smart move for ABC’s series to be more tonally similar. It also helps that Ghost Rider looks great.

A lot has changed after the time jump that ended Season 3, and not all of it for the better. Fitz is now keeping lies from Simmons, the team is split up, Coulson is no longer Director of SHIELD and the person who replaced him doesn’t have a lot of love in his heart for the ragtag bunch that came before him. Then there’s Daisy, who is so determined to not lose another person close to her that she is still evading Coulson’s attempts to bring her in, and has become a bit of a vigilante in the process.

Things have changed for Phil Coulson and Mack, too. The one-time directors of S.H.I.E.L.D. have been demoted to field agents over the time jump. We find them out on assignment in the Zephyr One, killing time between assignments by playing backgammon and grumbling about the new management (“everything is classified nowadays”). Suddenly, they get orders to fly back to base, which confuses them because they’re not due to refuel for a while. Coulson’s excited to see the old team again, though, especially May (Ming-Na Wen). 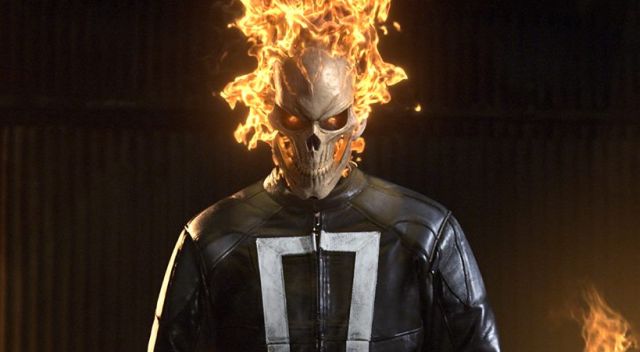 Cut to May, who’s sparring with the members of her elite strike force as the Zephyr One lands. Thanks to her contacts in law enforcement, she’s able to fill Coulson and Mack in on the grisly details of the Ghost Rider murders (apparently, one unfortunate goon got his spine ripped out). But the reason she had them come back to base personally was so she could tell them that Daisy might be involved — and in this new post-Sokovia Accords world where Daisy’s considered a dangerous fugitive, she didn’t exactly want to send that info over the wire. If they pursue, they might be able to catch up with her before she gets into deeper trouble. Then again, it might be too late for that. Daisy’s already breaking into a hospital to interrogate a survivor of the Ghost Rider attack. He helpfully informs her that Ghost Rider’s flames don’t just burn flesh and bone — they burn your soul. Apparently those soul burns were too much for a sinner like him and he expires, forcing Daisy to pursue other leads.

The Ghost Rider that most people are familiar with is Johnny Blaze, whether that’s through the many Ghost Rider comics or Nic Cage’s portrayal of the character across two live-action movies. So when you think of “Ghost Rider is coming to Agents of SHIELD,” you might wonder why he’s not tooling around on his classic bike or why the character is suddenly tearing up the streets of Los Angeles in a souped-up hot rod.

Agents of SHIELD’s Ghost Rider is actually the fourth person to take on the mantle (fifth, if you count the original supernatural cowboy that first appeared in the ‘60s, who had his name changed to “The Phantom Rider” after Johnny’s introduction), Roberto “Robbie” Reyes. Robbie is the most recent and freshest version of the character, having only first appeared in 2014—his series, All-New Ghost Rider by Felipe Smith and Tradd Moore, lasted just 12 issues.

Johnny’s power comes from Marvel’s equivalent of Satan, Mephisto, merging the young man’s soul with a demon named Zarathos, after the two made a deal for the life of Johnny’s adoptive father that went awry (Mephisto, of course, is famous for being the vehicle with which Peter Parker and Mary Jane’s marriage was erased in the infamous One More Daystoryline). Zarathos was a spirit of vengeance, causing Johnny to turn into the Ghost Rider in the presence of evil, compelled to hunt it down and destroy it.

Robbie, on the other hand, was resurrected by a spirit named Eli—an altogether more nefarious supernatural entity who pretended to be a spirit like Zarathos, but was actually the soul of a Satanist serial killer using Robbie to get back into the physical realm and continue to kill. While Johnny and Zarathos had a slightly more amicable relationship (as much as one can with a demon linked to your soul), Eli is a potent and sinister force that Robbie has to learn to keep suppressed, after making a deal with it that they would only take the lives of truly evil people. So expectSHIELD’s Robbie to maybe get a little bit nasty every once in a while.

In terms of the tone of the show, the darkness works for Ghost Rider, but there are some definite growing pains as the other facets of the experiment with the time slot freedom as well. The increase in blood and violence was a little jarring after three seasons of comparatively less intense action, but it did feel true to the direction SHIELD is headed in. What didn’t fit as well were the close up shots of Daisy getting dressed; these pants-come-up, shirt-comes-on sequences are familiar ways to add sexuality into TV shows and movies, but SHIELD has already done a great job establishing Daisy as a sexy character without needing to depict it in this unsubtle way. Hopefully the inclusion of more overt sexuality in the show feels a bit more organic to the show as it continues to explore the new territory of the 10 p.m. hour this season.