What to Expect in the Final Season of Game of Thrones

It has been a week since the Game of Thrones season 6 finale, annnnd it’s withdrawal peak for all of us. Know what that means?

The pace is moving quicker, endgame pieces are emerging, and the setups for the conclusion have been laid out.

What can one expect in the final season of Game of Thrones?

POSSIBLE SPOILERS. THIS ENTRY ASSUMES YOU HAVE CAUGHT UP WITH THE SHOW’S SEASON 6 FINALE AND WITH “A DANCE WITH DRAGONS”. 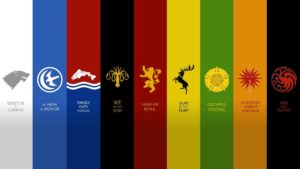 To determine what might occur, it would be prudent to re-profile the major houses.

The Baratheons from The Stormlands: Assuming Stannis was killed, the Baratheons no longer have a stake in the Game of Thrones.

The Tyrells from The Reach: The shocking finale wiped out the Tyrell bloodline, leaving Lady Olenna with no prospects for a blood-tied victory.

The Martells from Dorne: Former rivals to the Tyrells, the eradication of the Martell bloodline and the rise of its illegitimate rulers have pushed Dorne to forge an alliance with The Reach.

The Greyjoys from The Iron Islands: The Greyjoys are divided by a succession war between Asha-Yara & Theon on one end and Euron on another.

The Arryns from The Vale: Co-led by Petyr Baelish and the young Robin, the Arryns have bided their time with their seclusion, waiting for the perfect moment to take center stage.

The Freys and Tullys from The Riverlands: The locale is contested by the heirs of the former family and by the supporting houses of the latter.

These small fry will all be present in the endgame but solely as supporting pawns to the following three houses: Lannister, Stark, and Targaryen.

THE LANNISTERS FROM THE WESTERLANDS

Cersei has finally taken the Iron Throne, albeit at the cost of her children’s lives.

“Long may she reign,” Qyburn decrees.

War of the Queens 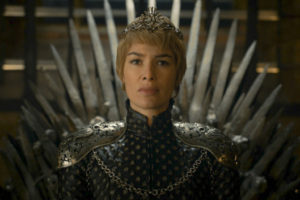 Cersei will lose in the Game of Thrones as prophecies in storytelling have a very poignant feature.

“Queen you shall be… until there comes another, younger and more beautiful, to cast you down and take all that you hold dear.” ~Maggy the Frog

The red herring to which this prophecy pertains was Margaery. With her gone, Daenerys becomes the true rival option. Sure, Margaery played a part in taking Joffrey and Tommen away from Cersei, but think about it.

What is it that Cersei truly holds dear?

Cersei’s reign will be even shorter than her sons’ and Daenerys will make it so.

The Lannister Queen, however, will not go quietly.

Lannisters Always Cash in on their Favours

It may seem one-sided that Cersei only has the Freys, Wildfire (or what’s left of it) and the zombie Mountain at her disposal against Daenerys’ Unsullied, Dothraki, Dornish, Tyrell, Yara’s Greyjoys, and Dragon army.

But Cersei may also succeed in getting the Vale, Euron’s Greyjoys, and the Tullys at her side. 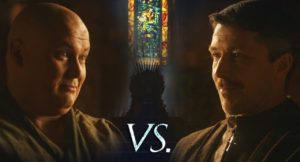 Petyr Baelish wanted the North for himself with Sansa at his side, to satisfy his creepy motivation of never having wed his true love—Catelyn. Since Sansa has happily reneged her Northern claim to Jon Snow (or so it seems), the North has become more united and Petyr will have no in.

Littlefinger will therefore need Cersei’s help. The Lannisters will also want to cash in on having given Petyr the city of Harrenhall and his lordship status. This unholy alliance will act as a nice tie-in to the Littlefinger/Varys rivalry and it’s telling who between them will emerge victorious. 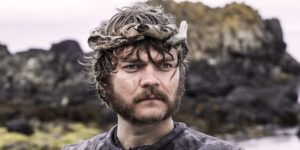 With regards to Euron, Yara got to Daenerys first and she agreed to halt the Ironborn raiding way of life. We know Euron wants leadership of the Ironborn and since he had no qualms in murdering his father to do so, we can infer that he is a much more conservative reflection of Ironborn culture—want, take, have. Cersei will only be too happy to indulge, offering Yara’s head on a pike (On that note, Yara will fall, paving the way for the now-subdued Theon to rise).

The Tullys and their supporting houses are the biggest wildcards. On paper, they should support Sansa as she’s the last known living relative of Catelyn. But the Tully’s current leader, Edmure, is still a Lannister-Frey prisoner and may yet be held hostage (or manipulated) into rallying the supporting houses for Lannister gain.

THE STARKS FROM THE NORTH

Sansa’s final season six scene—where she smirks at Littlefinger as the Northern Houses proclaim Jon, the King in the North—was very telling. She was manipulating enough to lure Petyr to her side when she needed him most but is quick to discard him as soon as he’s served his use.

The Queen in the North?

However, after having gone through many betrothals, Sansa may just want more than becoming a symbolic figurehead. After all, considering the power plays to which she’s been exposed and the suffering she’s had to endure, the once innocent Sansa may want some tangible recompense. Lest we forget: Sansa shared in Catelyn’s disdain for unconventionality—a bastard living in Winterfell being one of them.

Personally, I don’t think Sansa betraying Jon is a likely scenario but it is still one worth considering.

So what is a likely scenario?

We know from Benjen Stark’s final scene that the Wall is magically-infused and capable of preventing the White Walkers from advancing.

Now that winter has come, a winter projected to be the coldest yet, the Night King will find a way to pass. Whether that means he’ll build ships to sail around or if he’ll successfully find an instrument meant to tear the Wall down, I haven’t the foggiest idea. Yet it stands… 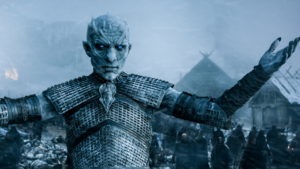 The Night King will pass.

In order to combat this threat, Sansa may finally “grow up” and remind Tyrion of the wedding to which they were sworn, thereby solidifying the North’s alliance with Daenerys.

But it isn’t Game of Thrones without another Stark dying and I reckon Sansa will be the final Stark casualty. Remember, Littlefinger is one of Sansa’s many suitors and is deeply motivated by his regret in failing to marry Catelyn. Taking Sansa with him to the Netherworld might be his final play, complicating the North’s survival.

THE LAST TARGARYEN, MOTHER OF DRAGONS

Daenerys’s endgame triumph will be far from straightforward, not just because of Cersei’s resistance, but also because of the inevitable drama to be borne from within her large army. How many will remain loyal upon landfall?

Dorne will be the biggest threat to the cohesion of Dany’s army. How so? 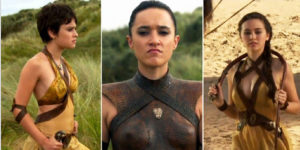 First, they offer no male progenitor with whom to safely secure an alliance. They are insignificant in the endgame at best and sacrificial lambs at worst.

Second, Tyrion may want justice for the death of one of the few Lannisters he likes—Myrcella. Daenerys is above involving children in the Game of Thrones and may be willing to overlook Myrcella’s lineage, as she has done with Tyrion. Her vengeful sense of justice might just resurface here.

Third, the Martells are extinct by Westerosi law and bastards are not legitimately recognized to rule. Daenerys may see the parallels in how the Sand Snakes took the Dornish seat with how Robert Baratheon took the Iron Throne from her father—through a premise of illegitimacy.

Daenerys will set the cities of her enemies ablaze, King’s Landing among them. But if she were to spill the blood of her allies, the Sand Snakes seem the most probable candidates.

But if we were to read into Quaithe’s prophecy from A Dance With Dragons:

“The glass candles are burning. Soon comes the pale mare, and after her the others. Kraken and dark flame, lion and griffin, the sun’s son and the mummer’s dragon. Trust none of them. Remember the Undying. Beware the perfumed seneschal.”

… It sounds like every single one of her allies will taste a portion of her wrath.

A Song of Ice and Fire

So what happens after Daenerys takes back the Iron Throne?

Recall the reason why Daario Naharis was left behind in Mereen: Dany fully intends to wed to secure a peaceful rule in Westeros.

Consider the few prospects remaining: Euron can be crossed out because of a conflict of interest with Yara, Jamie is the Kingslayer and will probably be flayed or mutilated for that unforgotten act, and Petyr won’t even get close especially if Tyrion or Varys have anything to say about it. 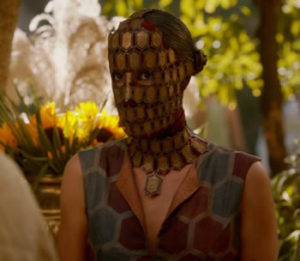 That leaves Jon Snow, hence fulfilling the song of Ice and Fire. Consider another prophecy by Quaithe:

“To go north, you must journey south. To reach west, you must go east. To go forward you must go back, and to touch the light you must pass beneath the shadow.”

As with her aforementioned prophecy, this one does not make an appearance in the show… but it’s held true so far. Daenerys makes a stand at Vaes Dothrak after “liberating” the southern cities of Essos, she’s spent many years out east in preparation for her rule in Westeros, and she’s foregone governing Mereen, after remembering her true purpose in claiming the Iron Throne.

The last line can refer to many things. My guess—“the light” is associated with the red priests’ prophecy, where the Lord of Light’s champion will wield the Lightbringer sword and vanquish the darkness, the White Walkers.

“Passing beneath the shadow” might just refer to Dany’s wedding to Jon, a man of the Night’s Watch and a resurged shadow of one who’s already died once. For her to assume the bearer of the Lightbringer, she must consummate with another true Targaryen…

THE GAME OF THRONES VICTORS

Well, there you have it. There are a million more things to discuss but not enough time or space in which to do so.

Will the armies of Jon and Dany face-off? Will Cersei wipe out most of Dany’s army with her wildfire? How will Dany be exposed to the White Walker threat? How will Jon’s true identity be conveyed, given that only Bran has the means to see it? Will Arya reconnect with Nymeria and succeed in vanquishing all those in her list? Will Tyrion betray Jamie and with whom will Brienne end up? And is Samwell’s final role to facilitate an alliance between Dany and Jon?

Whatever the answers may be, I reckon Jon and Dany will emerge the final victors in tandem. Jon’s honour and Dany’s ambition will balance each other out and they will prove to be a formidable king-queen duo.