Guardians of the Galaxy Vol 2

It’s difficult to catch lightning in a bottle twice, and that’s exactly what James Gunn tries to do in Guardians of the Galaxy Vol. 2. The word “Marvel,” as in comic books or movie studios, has become a foundational term of our culture. Yet you could sit through almost every one of today’s comic-book movies and not find a whole lot to marvel at.

That’s where “Guardians of the Galaxy” came in. In an era of overstuffed, taped-together blockbusters, it was supremely funny, exciting, and well-made — a rock ‘n’ roll space opera, spectacular yet lithe, without a stray shot or sequence out of place, and with a wildly caustic yet devotional interplay among its motley crew of renegades that recalled the original 1977 “Star Wars” (obviously its chief influence). The film wielded the machinery of big-budget franchise filmmaking and trumped it at the same time. So the question of what “Guardians of the Galaxy Vol. 2” can do for an encore isn’t really, “Can it top the first film?” It’s more like, “Can it be as good?”

It’s the same combination of cartoony action and intergalactic screwball with some ambient production design recalling the photorealist sci-fi imagery of Roger Dean or Chris Foss in a bygone age, creating a visual sense of earnestness to offset the archly retro pop culture gags. Again, it has its own supercharged Heart FM playlist of 70s and 80s music. The early 70s track Brandy (You’re a Fine Girl) by Looking Glass is laid on the soundtrack almost ecstatically in the opening sequence, and some tongue-in-cheek dialogue later invokes it as the greatest piece of music ever to have emerged from Planet Earth. This film rattles along and there’s a lot to enjoy. 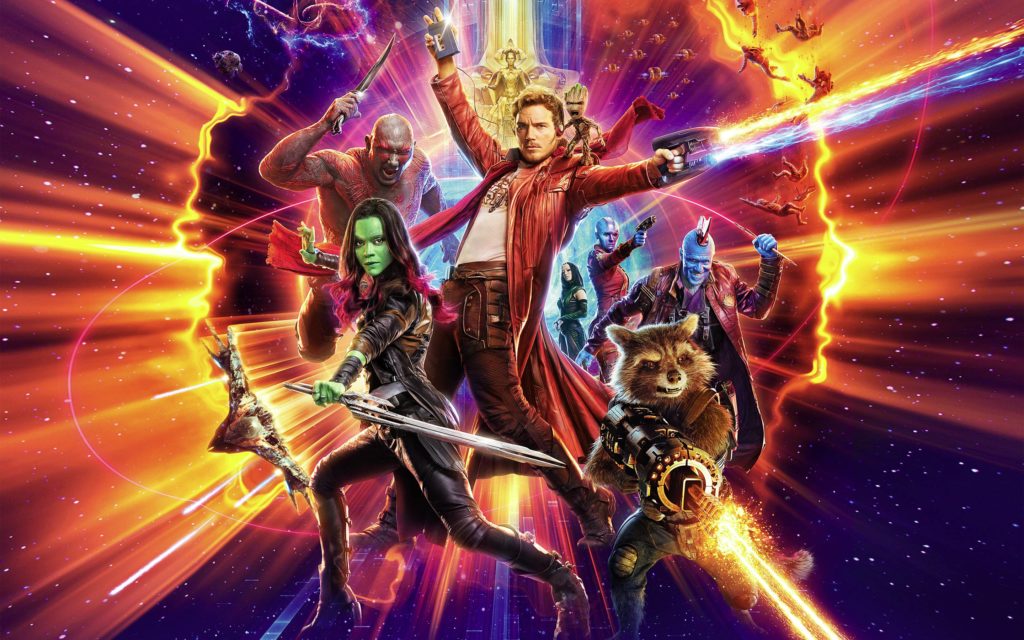 The old gang are still together: as well as Quill, there is the green-faced Gamora, played by Zoe Saldana, and the mighty, slab-like Drax, played by Dave Bautista. Vin Diesel provides the voice of Baby Groot, and Bradley Cooper voices the foxy, weaselly figure of Rocket; he is the louche and disreputable character whose job is to get the group into trouble.

The Guardians get into some serious trouble pinching some energy sources from a certain golden empress named Ayesha, very amusingly played by Elizabeth Debicki. She has a haughty, queenly manner and an air of frozen displeasure whenever one of her many courtiers make a mess of things: Debicki’s Ayesha would be a great returning character, and on the strength of this Debicki would be strong casting in any new film about Elizabeth I, stealing Cate Blanchett’s crown. 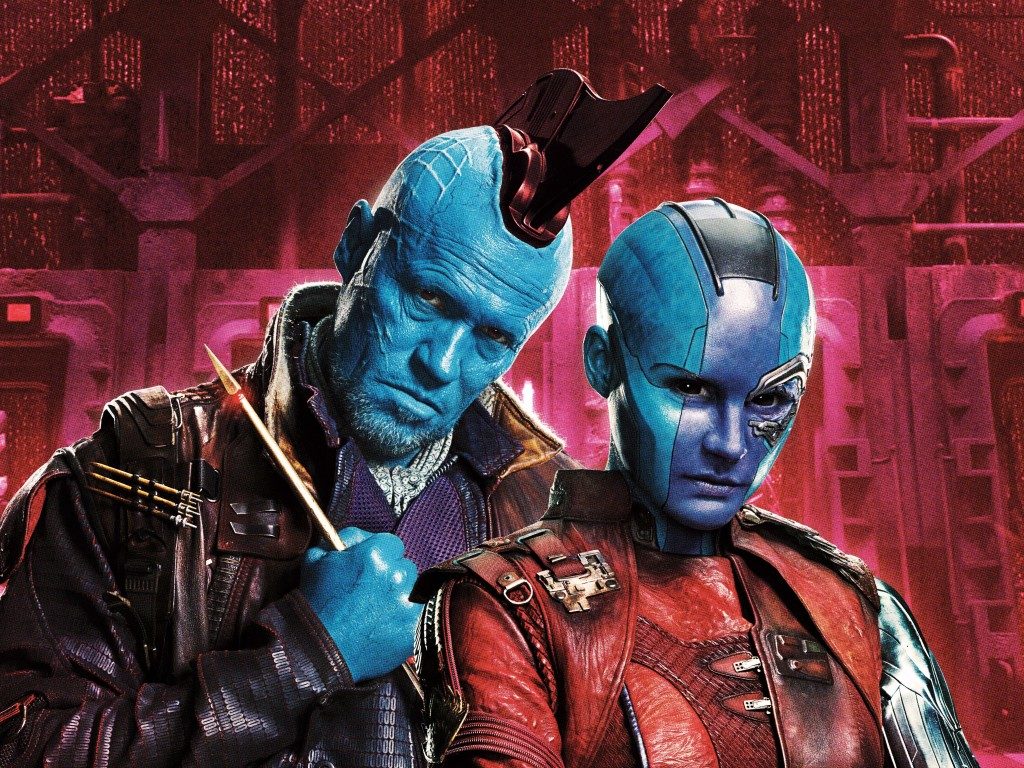 The ensuing cosmic affray brings Quill and the Guardians back into contact with Yondu (Michael Rooker), the hated freebooter who kidnapped Quill from Planet Earth when he was a child, and with Gamora’s fanatically driven and malevolent sister, Nebula, played by Karen Gillan. But most pointedly of all, there is a new character, worryingly named Ego, played by Kurt Russell, whose “prequel” relationship with Quill is signaled pretty clearly in the opening scene. There is something unsettling in his buttery tan and bouffant splendor as a digitized young man and in the gravitas of his facial hair in the present day: he is a character with no small opinion of himself.

There are, once again, some funny lines, very often given to Drax, who has a way of oversharing. Pom Clementieff is very entertaining in the role of Mantis, a helpmeet of Ego; she has the gift of being an empath, someone who can intuit how someone else is feeling by laying hands on them but is in every other fantastically naive and un-insightful about the way human beings behave. 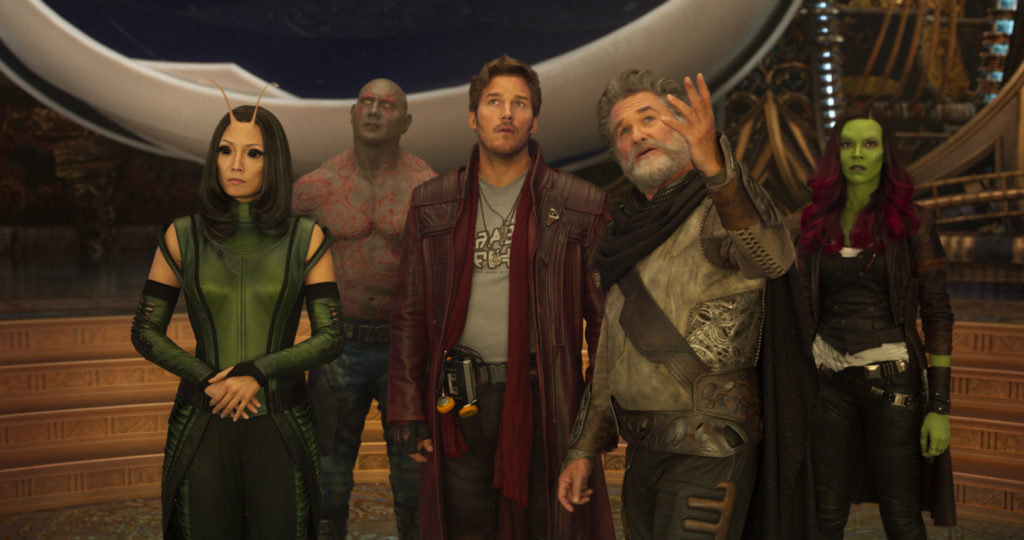 Can Guardians of the Galaxy avoid the perils of the threequel?

Ego himself introduces some apparently huge Freudian issues to the film, which on paper would seem to take the film’s emotional impact up a notch or two. But they are dealt with insouciantly, even flippantly – far more so than in something like Star Wars or Superman. That’s in the keeping of course, with the distinctive comic flavor of this franchise, but the revelations about Quill’s background just zing and ping around with the same pinball-velocity as everything else in the film. It’s fun, though GOTG2 doesn’t have the same sense of weird urgency and point that the first film had. They’re still guarding, although the galaxy never seems in much danger.

The Stan Lee cameo is a special part of every Marvel movie. Everyone always knows that it’s coming, and yet it’s always delightful to see the co-founder of the comic book company deliver a silly line or play in a funny scene. That being said, his appearance in Guardians of the Galaxy Vol. 2 is special. Not only does it turn out that Lee is working with The Watchers — beings who always keep an eye on the multiverse — but also that every single one of his cameos has him playing the same character, as opposed to different ones each time out. It’s a fantastic and funny moment in the blockbuster, but what makes it really fascinating is the implication that it may have worked for all Marvel films, not just those in the Marvel Cinematic Universe.

Tags: Guardians of the Galaxy 2