The Walking Dead, Z Nation, Resident Evil, REC, Warm Bodies, Planet Terror, Dawn of the Dead, Dead Snow, Zombieland, Shaun of the Dead, 28 Days Later… This list can easily go on, and  I hope you see the common denominator between all of these. That’s right, you got it: Zombies! We can’t seem to get enough of them, and quite frankly there have been, probably, more than enough books out there discussing the subject, and how one can survive in case of an impending zombie apocalypse. Reading one or two of those books will probably come in handy at some point in your 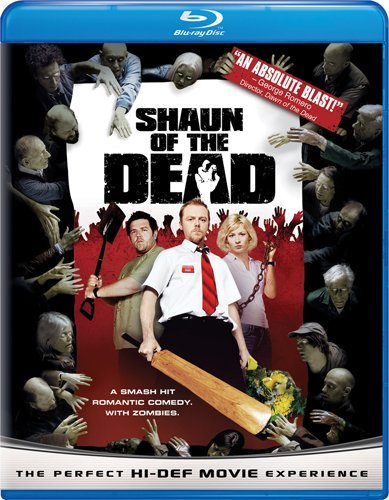 Cover of Shaun of the Dead

life, but why not make life easier and save some time. *Drum role* Introducing the top ten things you need to have come the what seems like the inevitable zombie apocalypse.

So procreation (or prevention of) might not be at the top of your list, which is totally understandable under the circumstances, but bare with me on this one. Condoms will probably be on the bottom of everyone’s list when it comes to essential items for survival, thus they should be readily available to you — the savvy zombie apocalypse survivor. Due to their rather sturdy composition these little bad boys are great as storage, gloves, and even fire making: durable and handy.

Yup. Ok, so you wake up one morning and realize your neighbours have turned into brain munching zombies, mom doesn’t answer your calls, the ex is probably dead so there’s no point in checking if they’re ok, which leaves you on the look-out for number one. Food and water should be at the top of your list, duh… Unfortunately, everyone else has exactly the same set of priorities. Food and water are probably going to be the very first things to go, which is exactly why you should be heading to the nearest book store and getting that bug cookbook. Bugs are full of nutrients and proteins *highly important*, and most people will rather starve than eat them, which gives you an advantage.

Drinking yourself to a stupor is one way to deal with the end of the world, but moonshine has by far better uses than just that — sanitization being one of them. In a chaotic world filled not only with raging zombies, but also humans who go rapidly insane, all sorts of medication will run out faster than you can say your ABCs backwards. So while stocking up on gauze, bandaids, aspirin, and antibiotics don’t forget your pals Jose, Jim, Johnnie, and Jack. In some cases it can even be used as fuel. You welcome.

Wits can get you far, but they cannot get you all the way. In a zombie apocalypse one needs a weapon. Sure, guns, knives, arbalets, and all those things are pretty awesome, alas the problem with guns is that you can run out of bullets, knives demand close physical contact… You get the picture. The ax is highly practical because not only will it bring a devastating blow on your growling and snipping opponent but you can also do all sorts of things with it: chop stuff, and so on… Best thing about an ax is that it doesn’t need a re-load — ready when you are.

Now, this should really be a no brainer. Have you noticed that they never mention this one very key item in apocalyptic tv shows? Our heroes are so badass and hardcore: they kill, slice and dice, deal with complicated and intense human drama, occasionally they even eat… But they never sh*t. Are they not human? Do they not digest? What sorcery is this? Anyway, come apocalypse make sure you are not caught with your pants down, unprepared. Stock up on that Charmin like there’s no tomorrow! In an ideal world when you need fire you’ll have lighter fuel, lighter, matches, perhaps some paper, but guess what? In an ideal world you won’t have to survive zombies either. Let’s say it’s winter — you found yourself a garage as a means of a shelter. Naturally there is no fuel anywhere, you used up all of your matches about four months ago, and lighters became more rare than unicorns. What do you do? This is where my advice on steel wool and batteries comes in handy. Get your hands on a 9 volt battery (or two batteries of any kind, to create to closed circuit) and some fine steel wool, rub the edge of the battery on the wool and presto: let there be light!

If you made it this far on the countdown you should know by now that resources are very limited, scarce even. One thing we should still have in abundance (hopefully) is sunlight. Get your hands on anything that can be powered by UV rays and keep it close, keep it safe. In the words of Albus Dumbledore: energy can always be found even in the most apocalyptic of places if one only remembers to bring solar powered devices.

Horses, tanks, school buses, motorcycles, helicopters, bikes… So many options so little time. Chances are that while trying to outrun the walking dead you will alter between these more than once. Making your journey on foot is not much of an option, even if it is better for your health and the environment. Sadly enough at times you won’t have much of a choice and will stick to whatever is available;  yes, even a clown car.

2) Lone Wolf vs. Three is Company

In the pre-apocalyptic world you might have been as in demand as Kylie Jenner, or the shut-in social outcast. If you were unhappy with what was up in your life see the zombie outbreak as a fair shot at re-birth. You can gather up people, work in a team, and potentially increase your chances of survival. On the other hand working alone means you won’t have to care for anyone else, probably won’t take unnecessary risks, make your own decisions, and move at your own pace.

1) Colonization vs. Constantly hitting the road

Okay, so there are no more governments, no taxes to pay, and all the toll roads are toll-free. Under different circumstances this would have been a great era to be alive, however, occurrences such as these usually indicate chaos and disorder. If you ever dreamt of creating a utopia there never was a better time like the present. Find like-minded individuals, enlist them to your cause and start growing those organic tomatoes you always dreamt of. Barricading yourself in your apartment/house could also work. Based on what I saw on tv utopian societies never really work out, and zombies will always find a way into your base (sooner or later). Is being constantly on the move a good idea? It’s also quite risky especially considering that you won’t be able to grow anything or be, at least, partially, self-sufficient.